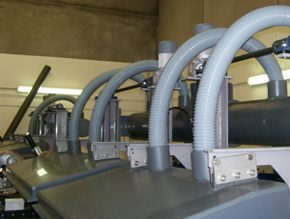 Air Pollution
In all the conventional plating technologies, especially when the chromium-plated bars are pulled out from the tanks, a big deal of harmful fumes escapes into the working rooms, while no poisonous vapor is released in the Continuous Chrome Plating method. In our high efficiency exhaust system all fumes that are released are completely collected by the exhaust hoods, which are always shut, and sent to the scrubber. Therefore the needed flow rate of the exhaust is about 1/10 of the traditional system. Furthermore PLATING INNOVATIONS has developed its own system of “zero emission close loop” which recycles all the vapors released during the chromium plating and all the rinsing water. The Zero discharge is finally possible and simple. For all the reasons above and in light of the increasingly stringent regulatory environment in matters of emission control and environmental sustainability, it can fairly be stated that the continuous plating system is bound to become the technology of the future, superseding the traditional system, whose limits are more and more apparent.

Bath Volume
The production rate being equal, in our plating units the tanks contain about 1500 liters of plating bath, whereas the conventional plating needs at least 10 times this quantity. There are no electrolytic solution leakage problems like those that are so often noticed in the traditional systems. With our products both environment impact risks and new equipment starting costs are strongly reduced. Solution warming time and cost after the weekly stops are dramatically reduced. 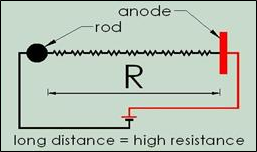 Energy
The peculiar design of both the plating cell and the power distribution system allows to optimize the use of the energy. The distance between anode and cathode is very close and the bus bars are made with generous section of 99,9% electrolitical copper. If compared with the traditional method, the continuous chrome plating process allows such energy saving in KW/year that can reach even 30% and more.